I grew up eating Colombian arepas for breakfast, lunch, dinner and snacks. Arepas were a part of my daily life throughout my entire childhood. Whether it was scrambled eggs and a buttered arepa for breakfast or melted cheese on an arepa. There wasn't a day that passed that I didn't eat one of these.

This was another dish that I didn't realize weren't "normal" until adulthood.

What are arepas made of?

Colombian arepas consist of only 2 ingredients, that's it! Arepas are made of masarepa and water. Masarepa is arepa flour made of white or yellow corn.

Some arepa variations include adding shredded Colombian white cheese or mozzarella to the dough.

What is the difference between Colombian and Venezuelan arepas?

Colombian arepas are thin, griddled/grilled, about 7-8 inches in diameter. Colombian arepas are used as a side dish to your main course. Most commonly eaten during breakfast, but can be serves as an accompaniment to lunch or dinner. Sometimes, you'll rip a piece of your arepa off and use it to pinch off a piece of meat or dip it into your stew. In some occasions, you'll treat a Colombian arepa like an open faced sandwich by piling on top cheese or meat.

Venezuelan arepas are thicker and smaller. Their recipe typically calls for the addition of salt and oil. Sometimes they're fried. Since they're thicker, they're sliced in half and stuffed with protein like chicken salad, cheese, beans, shredded beef, or pork. Similar to a pita pocket. They're part of the main course, unlike their Colombian counterpart.

Check out these other Colombian recipes 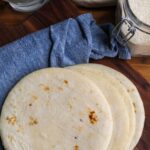