Home » RED The Steakhouse, So Much More Than Tasty Meat

It's kind of sad to admit, but prior to last week I had never been to RED The Steakhouse. Not only is it a sad admission, it's a regretful one. Now that I've been to this restaurant, I've been kicking myself for not having been sooner. The restaurant is located in the SoFi (South of Fifth st) neighborhood in Miami Beach. It's slightly removed from the aneurism-inducing traffic located throughout the rest of South Beach, so parking and traffic isn't a complete nightmare. What prompted me to go to the restaurant was seeing an article in the New Times stating that they were recreating a version of the newly famous Cronut, the Kronut Kruller. Clearly, I had to go..."investigate."

I sat down and our waiter was very knowledgeable and helpful. He started us off with some freshly made bread. We looked over the menu and were a bit overwhelmed. The bread was nice and warm, but nothing really 'out of this world' about it. 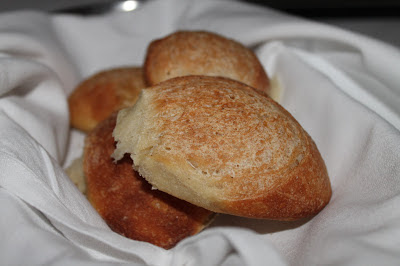 We moved right along and decided to try out Brad's Stuffed Hot Peppers. They were stuffed with a house-made sausage and covered in a homemade marinara. These things were spicy, but delicious. That marinara was great and I ended up using the warm bread to slop up the marinara so it wouldn't go to waste.
. ﻿ 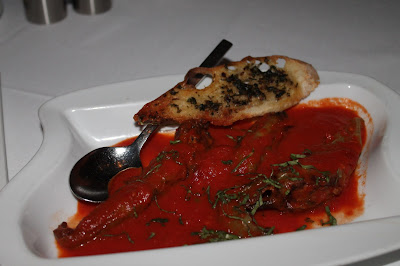 We then had a seasonal appetizer; Sashimi Blue Fin Tuna on mango puree and then topped with diced mango, ponzu gelee, cilantro crème fraiche and chili pepper flakes. It was sweet, spicy and refreshing all at once. The fresh tuna just disintegrated in my mouth like buttah. Personally loved this dish. 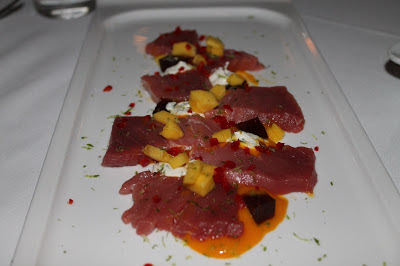 I went ahead and ordered their French Onion Soup Gratinee, because I don't pass up any chance to eat a block of melted Gruyere. This was very easily the best French onion soup, I've ever had. Just hands down, amazeballs. 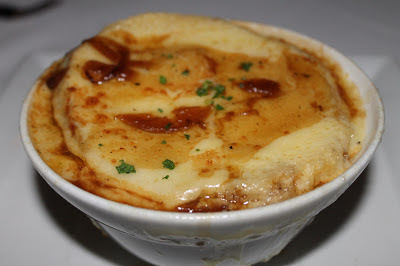 I was starting to notice a trend, each passing dish was my new favorite. We moved into a dish that just wowed me. Locally made burrata wrapped in jamon iberico served with heirloom tomatoes and topped with the best Balsamic Vinegar I've had in ages. Wow, just wow. That burrata is what dreams are made of. No seriously, I've had dreams about that burrata! The only thing better was getting a little of everything in one bite. 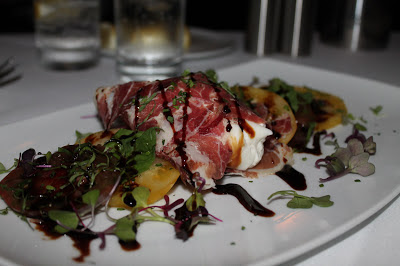 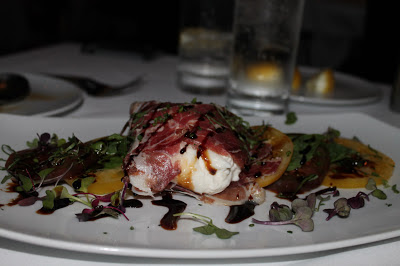 It wouldn't be a proper visit to this restaurant without getting a steak. I mean, who the heck goes to a steak house and doesn't get a steak? Actually, nevermind I've done that before... but I digress. We got their New York Strip, medium rare. I had never had a steak quite like this one. The exterior had a great sear and an almost, slightly crunchy bite. The interior of this bad boy was the complete antithesis, it just melted in your mouth. The words "fuhmazing" and "magical" come to mind when thinking back on this steak. Seriously, the best steak I've had in Miami. 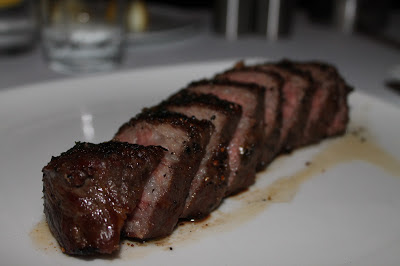 You can't have a steak without some side dishes... so we go four of them. Something to keep in mind, the side dishes are all a la carte. My two favorite side dishes were the 4 cheese mac with truffle and the creamed corn. The mac and cheese was delicious, creamy and well seasoned. The creamed corn was creamy, but was filled with pieced of whole corn and topped with a crunchy, crumb topping. My two least favorite sides were the green beans and the potatoes au gratin. The Potatoes Au Gratin I found to be slightly under-seasoned for my personal preference. The green beans are spiced up with pepper flakes then mixed up with pancetta and pine nuts. They were ok, and if you love green beans then have at 'em. They're my least favorite because green beans VS. mac and cheese? I mean, C'MON!? There's no winning that competition #MacAndCheeseAllDamDay!

At this point, I had unbuckled my belt and undid the top button on my jeans. Alas, I couldn't leave without having the one thing that had driven me here in the first place, the Kronut Kruller. We got kronut donut holes that had been rolled in powdered sugar, just diabetic heaven. We had their simple kronut cruller that comes topped with a maple glaze and we also had the kronut filled with a vanilla and rum infused crème. The dough was crisp, flaky and warm.The vanilla and rum crème filled kronut was my favorite. The donuts were set atop a raspberry sauce that had been drizzled over the plate, I felt the raspberry sauce overpowered the milder flavors of the maple frosting and the rum infused crème. Either way though, these were delicious. My understanding is that the Kronut Kruller will only be available for a limited time depending on their demand. So check them out before they're gone! ﻿ 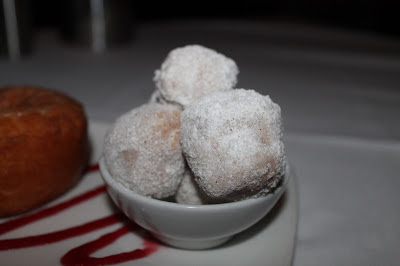 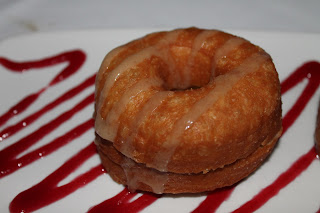 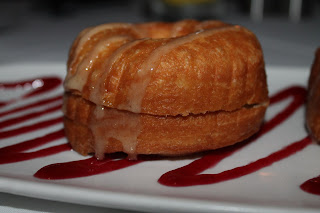 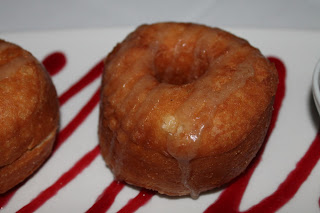 This place was awesome. Hands down, just delicious. But like most high quality steak houses in Miami, it sure as hell ain't cheap. This is the kind of place you go to celebrate an anniversary, a birthday or if you're trying to seal the deal with a hot chick. I definitely liked how Executive Chef, Peter Vauthy, went around to pretty much every single table in the restaurant to see how everything was going.  One of my new favorite steak house in Miami.