Unlike other people, when I travel I am most excited about the indigenous food I'll eat. When I went to Paris, I wanted to only eat choux pastry and swim in a sea of Roquefort cheese. Who cares about the Eiffel tower when there's so many baguettes to eat?! In Spain, all I cared about was chorizo and churros. My sight-seeing revolves around my dining reservations. So on my recent trip to Portland, my dining itinerary was several pages long while my sightseeing down to 3 vague bullet points (book store, mountains and coast).

People have previously asked me how I figure out what restaurants to dine at while on vacation and the answer is RESEARCH! I put in werk when it comes to my dining itinerary. I look up local food blogs in the city I'm visiting, local branches of national publications (Thrillist, Eater etc...), Instagram, national food sites (Food52, Food & Wine etc...) and yes, even Yelp. I reach out to followers on social media for their suggestions and look up food forums (Chowhound). Once I see restaurants pop up more than once on different sites, they get added to "The List." The more times I see a particular restaurant mentioned in various avenues, they get bumped up towards the top of the list. Once I get to wherever I'm traveling to, I always ask locals for their recommendations and insight.
I was in town for a week and 2 of those days were spent exploring the mountains and driving down the coast. There's plenty of places on my list I didn't make it out to, but either way I'll be sharing the names to those places so you can hit them up if you're ever in the area.  I'm breaking up my restaurant posts about Portland into 2 posts (mostly for my own sanity). My first post covers all of the amazing breakfast spots I hit up. I was amazed at how many restaurants offer breakfast during the week. It was fantastic, like I was in a bacon and waffle filled dream. Since weekday breakfast options in Miami are limited to a few diners, McDonald's and Cuban bakeries, having so many options in Portland was a real treat.

My first epic breakfast in Portland was at southern inspired restaurant, Screen Door. I had read on several website two key points: The food is EPIC and the line for a table is HORRENDOUS. This restaurant doesn't take reservations for parties smaller than six people, so the line for a table can be anywhere between 1.5-2 hours at any given time. So what did we do? We got to the restaurant 20 minutes BEFORE they opened. I was naive in thinking there would be no one there at that time and well, the line was already wrapped around the block. Luckily, the minute the doors swung open we were seated almost immediately. We stuffed our faces on breakfast hush puppies, fried chicken on sweet potato waffles, pumpkin pancakes, fried green tomato benedict and praline bacon. Each dish was rich, flavorful and the portions were massive. 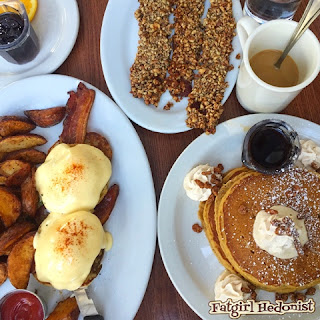 DO NOT GO TO DOODOO VOODOO DONUTS!!! Do not let the hype fool you! I can not stress this enough, like seriously. You will wait an hour and stuff your face with flavorless, bland donuts. Your soul will cry and your stomach will ache. Instead invest your time and calories into Blue Star Donuts. Their aim is to offer "donuts for adults" and their flavors pair with that slogan perfectly. My favorites included Blueberry, Bourbon & Basil, Orange Olive Oil and Raspberry & Rosemary. These inventive flavors made for amazing donuts that go magically with the Stumptown coffee they're served with. There are four locations throughout the city and every time we passed by one we could not control ourselves; we had to go in and at least get 1 donut almost daily.

Many moons ago, I said that Chef Micah Edelstein reminded me of the Soup Nazi from Seinfeld. Time has surely passed and a lot of things have changed. Nemesis Bistro in downtown Miami no longer exists and Ms. Edelstein has taken her talents to Portland where she owns and operates the Feisty Lamb. Bits and pieces of Nemesis Bistro live on at The Feisty Lamb, whether it's the unique umbrellas that make up part of the decor or some of her signature dishes that wowed patrons in Miami.One thing that is completely new is that The Feisty Lamb offers breakfast. In true Chef Micah fashion, this ain't your typical breakfast. We stuffed our faces with a Lamb Bacon Sarmie which is a delicious lamb bacon sandwich topped with pickled veggies, fried egg, roasted tomatoes and grilled greens in a potato roll. Up next we had carrot cake waffles with piri pir swiss meringue, turmeric garam masala butter and spiced pecans. We moved onto squash latkes made with topped with bulgarian yogurt, crispy sage and hazelnut crunch. Lastly, we had the daily special of lamb and mint fritata with feta and lamb fat chips. As usual, Chef Micah took the breakfast dishes we are accustomed, turned them on their ass and gave them a complete makeover. This was easily one of the funnest meals I had all trip.

Commissary Cafe is a place I found merely by chance. Our AirBnB was a block away from this little coffee shop and I came here every single day for my java fix. They make a fantastic latte and their breakfast selections were also delicious. They offer about a handful of different breakfast options, but all great. Between the homemade biscuit with bacon, scrambled egg and cheese or the yogurt and housemade granola, I really couldn't pick a favorite. The staff was always really kind and I was obsessed with the music they played.
I had heard on the interwebs rumblings of a magical window where people got delicious waffles from. I made finding this glorious Waffle Window my mission and after getting lost for 25 minutes, I was victorious. We feasted on the Whole Farm waffle made of pepper bacon, mushroom, spinach, roasted pepper, grape tomato, marinated chèvre and we threw in a fried egg for extra protein #Gains. We also ate a waffle topped with poached pears, figs, prosciutto, Gruyere cheese and topped with a sprinkle of hone with rosemary. For "dessert" we had a banana and nutella waffle with a mountain of whipped cream on top. The waffles themselves has a delicious little crunch that gave way to a fluffy warm interior.

Tasty N Alder (and its sister restaurant, see below) was one of those places that popped up on pretty much every single food site I found. It was clear to me that I HAD to go here. So we made our way for breakfast and was surprised when the wait for a table on a Tuesday morning was an hour and a half. The place was slammed and all I could think was, "Don't these people have any god damn jobs they should be at?!" We decided to just hang out at the bar and get our drank on at 8am, I mean we were on vacation after all. Four cocktails later, we finally got a table. I opted for their breakfast version of a Korean bim bim bop which they referred to as a Bim Bim Bacon and Eggs. It came in a cast iron bowl filled with some of the most delicious crispy rice I've ever had. The crispy rice was topped with carrots, kimchi, short rib, bacon, mushrooms, soybeans, sauteed greens, a fried egg and scallions. The flavors were all very distinct but they somehow worked harmoniously to make a fantastic (and filling) meal. The person I was with decided to get a pan fried halibut sandwich. I have no idea what kind of human being gets a fish sandwich for breakfast, but it was really tasty. The giant slab of juicy fish was too big for the bun and slaw it was served with and made for an impressive presentation alongside a giant bucket of duckfat fries.

Clearly, breakfast is the most important meal of the day so I had to make it a top priority. Every meal seemed like I was daring myself to eat more delicious food than the last meal. So, it's really no surprise that I gained 10 lbs in 1 week even though we walked an average of 10 miles a day. The truth is, if I had packed more yoga pants I totes would've gone to a couple of more places. I have to admit that I went to Portland a bit skeptical, but I came back as such a huge fan of the city and more importantly a huge fan of their dining scene.

Breakfast Joints I didn't make it out to, but you should if you get the chance:
Pine State Biscuits
Mother's Bistro
Tasty N Sons (sister restaurant to Tasty N Alder)
Sweedeedee
« Enter to win 2 VIP SoBe Seafood Fest Tickets!
Instagram 50k Milestone Giveaway Of Some Of My Favorite Things! »