Last week my boyfriend and I decided to stay in broward for dinner. We tried our luck at a couple different restaurants in Fort Lauderdale and were met with almost 2 hour waits for a table. We decided to get a little crazy and head to Boca Raton to try this place John had on his list. So we did the drive and got to Boca Raton, which is a completely different planet for my Hialeah raised ass. The restaurant itself is located inside the Mizner Park shopping plaza which was buzzing with want-to-be-hip retirees desperately trying to hold on to the last remaining slivers of their youth.

We walked in and the inside of the restaurant is the complete antithesis of the remainder of Mizner Park, it was young, great alternative rock playing on the stereo, good beer selection and an amazing Asian inspired graffiti mural. Our waitress was sweet, informative and was able to give us a full run down on the menu. 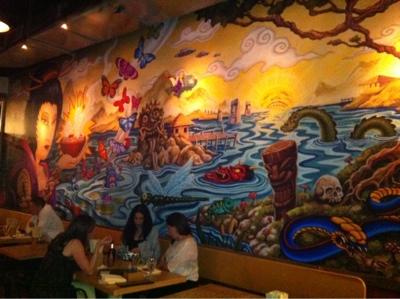 We decided to start the night with a couple of their buns. I had their crispy duck confit buns and John went with their Korean BBQ beef buns. My duck buns were delicious, the duck confit came topped with thinly sliced cucumber and what knocked it out of the park was a dried cherry creamed goat cheese. The cherry and goat cheese combo gave it a slightly tart creaminess what went perfectly with the savory flavor of the duck. While I was stuffing my face with buns my boyfriend was inhaling his korean bbq beef buns which came topped with shredded lettuce and pickled cucumber. He said the beef was tasty, fresh and the bbq sauce was light and didn't overpower any of the other flavors. He did say that the lettuce was a poor way to give the buns any kind of crunch and that cabbage would've been a nice crunchier fit. We both had the same problem that are buns fell apart. Although the buns are soft and fluffy, they were no match for their juicy contents and would break in the center leading to messy buns. 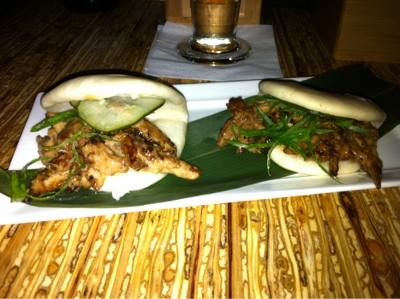 Up next I had their crispy chicken skin, yep you read that right. Think of chicken's version of pork rinds. They were light and super crispy. They were like nature's fatty potato chips. I couldn't really stop eating them. They're served with what tasted just like soy sauce and decorated with a miniature parmesan crisp. My only qualm is that I would've like to have seen a little bit more seasoning on these guys. Although, naturally they tasted great, some sort of funky seasoning on them would have really kicked it up a notch. 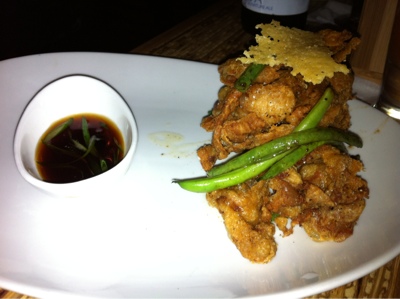 My boyfriend had their steamed shrimp dumplings which are served with a chili pepper infused soy sauce. For him, this was probably the lowest point of his meal. He said that although the ingredients were well cooked, the dumplings tasted really, "shrimpy" and that he felt it was a little distracting. 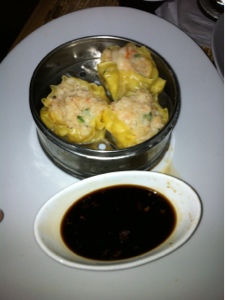 My boyfriend then had their pan seared diver scallops that come with bok choy, drizzled with green curry sauce over a bed of straw mushrooms and rice. The portion was really generous and could easily feed two people. All five scallops were large, plump and perfectly cooked. Only recommendation he would make is to cook them with no seasoning. The seasoning burned and ended up giving the scallops an unfriendly crust of crackling burned bits in his mouth. The green curry sauce had the perfect amount of heat and was delicious with the rest of the dish. I was so full by the time this dish came out that I was bummed that I couldnt try a bite. It looked great. 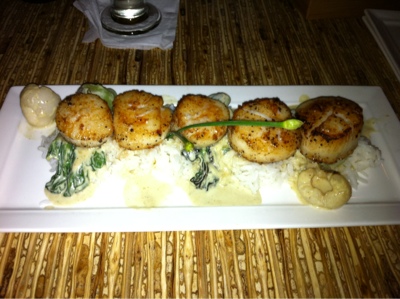 I then had their green tea cured salmon; this was easily the best dish of the night. This was absolutely delicious. The salmon is served with fresh and fried basil leaves and longan berries that have been stuffed with a yuzu-kosho (citrus) gelee. The waitress told us that the way to eat this dish is by wrapping a piece of salmon around the longan berry so you can get all the flavors at once. The waitress also mentioned that if you don't get a little bit of everything in each bite you miss out and boy was she right. The citrus gelee and longan berry gave the salmon a slightly sweet and refreshing flavor. I usually don't eat slabs of raw fish like this, but the salmon was insanely fresh with a tiny hint of the green tea flavor through out the meat. It's been several days and I'm still thinking about how good this dish was. 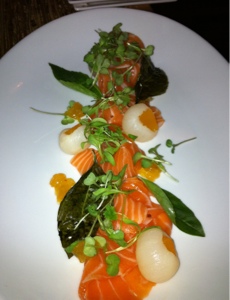 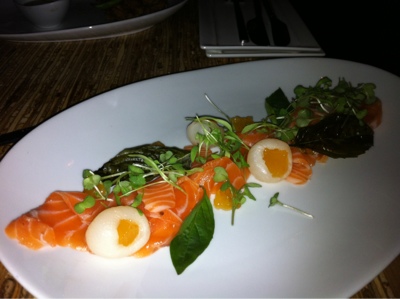 If you're in the Boca Raton area and looking for funky Asian food or if you're looking for a restaurant that plays awesome indie/alternative rock music, then definitely check this place out. The atmosphere is fun, the staff was insightful, helpful and the food was overall reall good. It makes me sad that this place is an hour away from home, but if you're feeling adventurous then I encourage you to take a drive.