The best part of life started when I realized it doesn't have to be someone's birthday in order to bake a cake. Coconut cake is one of those cakes I didn't learn to love until later on in life, now I'm obsessed. I'm also obsessed with dulce de leche and that combination resulted in this recipe for coconut dulce de leche cake.

To make the dulce de leche, you can use this recipe.

If you're not a fan of toasted coconut? You can opt for untoasted coconut instead. I personally love the crunch and texture the toasted coconut adds to this coconut dulce de leche cake. I also love the color it gives the cake. Instead of toasting the coconut, simply use the 2 cups of sweetened shredded coconut listed in the buttercream section of the cake to cover the cake on all sides.

If you're not interested in a dulce de leche filling, you're missing out you can simply omit the dulce de leche and use the buttercream filling for a more traditional coconut cake. 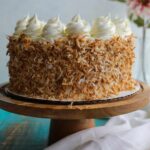