Home » How I became FatgirlHedonist

Most people on the interwebs know me as Fatgirl Hedonist. I write a relatively anonymous/incognito blog about gluttony and restaurants in South Florida with a whole lot of Miami Spanglish tossed in. Most of the people that follow my blog or my instagram feed do not know what I look like. So when people who know me as FGH meet me in person for the first time they typically say, “You’re not fat!” And this look of sadness sets in their eyes like I just killed their puppy.
I attribute this to my physical appearance not meet people’s preconceived expectations of what “Fatgirl Hedonist” looks like. So the question immediately after their initial statement is usually, “How did you come up with the name for your blog?” The answer to that is easy, “Once a fatgirl always a fatgirl.” The hedonist part comes from that almost orgasmic pleasure that comes from a delicious (and usually fattening) plate of food. Be it a gooey mac and cheese, a juicy cheeseburger or a decadent french pastry.
The statement “Once a fatgirl always a fatgirl.” refers to the mentality of a fat girl and nothing to do with physique. This is one of those things that is hard to put into words, but EVERY fat girl knows exactly what I’m talking about. That urge to eat your feelings when you fail an exam or break a nail. The thought that cookie dough ice cream can fix all ailments.
There’s also a dark side to this mentality and it typically consists of a neurotic paranoia where you just sort of assume that anyone who is whispering or looking at you is talking about you and your undesired size. It also comes with a sense of shame, especially when you condemn yourself to eating a bucket of Popeye’s chicken in your car because you feel ashamed to eat in the presence of others. Along with this shame, comes this inevitable fear that everyone is judging you especially when they see you eat that entire Papa John’s large pizza by yourself. This shame and paranoia leads to a sad fat girl with poor self-esteem which turns into a cycle that is extremely hard to break.
Sadness & Shame> Eat > Gain Weight > Sadness & Shame> Eat Some More > Gain Some More Weight
Seven years ago I looked like this:

I weighed 320 Lbs and wore a size 24 pant. I could only shop at Lane Bryant or the Macy’s “WOMEN” section. I was so morbidly obese there were parts of my body I hadn’t seen in YEARS, yes I’m referring to those parts. Having a relationship or engaging in sex were alien concepts to me that I could only dream about, because let’s face it: Who wants to date a girl shaped like a Hummer? I was teetering on the brink of high cholesterol and diabetes. My eating habits consisted of one monstrous meal a day either a McDonald’s double quarter pounder, cheese and bacon only or a massive plate of arroz con bistec. My one meal a day was usually around 10-11pm. Walking around for more than five minutes became a daunting task. Even with all of this, when I’d look in the mirror I’d still say to myself, “Ok ok, I may be chunky but I’m still hella cute!”
Now I look like this (on a good day): 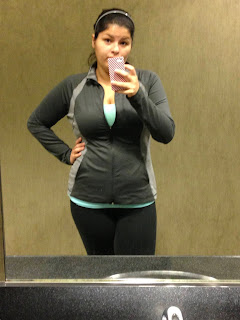 I’m still overweight, but I’m 100% content with my life. A total 150 pound weight loss over the span of two years. It took seeing that first picture above to realize, I am NOT hella cute. My first thought when I saw that picture was, “Oh my god, I’m a monster.” I cried myself to sleep, I woke up, ate a half-gallon of ice cream (cookies & cream in case you were wondering) and then I went back to sleep. Once I woke up I realized I couldn’t continue to live like this. If I ever wanted to have a boyfriend, be healthy or grow passed the age of 50, I needed to lose weight. Much like a drug addict, I had to “hit bottom,” to break away from the cycle and make long-lasting change in my life.
The next two years were arduous to say the least. I hit several weight-loss plateaus along the way. I didn’t do any research and just used my good ol’ common sense. Looking back I wish I would’ve done some research, but I can’t complain. I changed my eating habits to 5 small meals a day. I cut out soda, fast food, fried foods and most dairy. Due to my fat girl mentality, I was afraid to go to the gym or exercise in front of other people. I didn’t want to be judged by beefed up 'roid heads.
After I hit my first plateau I had no choice but to add exercise to my regiment. I started off with walking around my neighborhood and then changed things up every time I hit a plateau. I still remember that moment when the scale dipped under 200 lbs, it was the first time it had ever been under 200 since I was in the sixth grade. I cried for an hour, I took pictures of the scale and then I woke up my mother so she could look at it too and verify what I was seeing. I know, this sounds insane but it’s one of those things you can’t empathize with unless you’ve been there. My original weight loss goal was to get down to 150lbs, but I got comfortable at 170. I know, I know I was so close to my original goal.
In the last year, between my crapulous/hedonist blog and some other stuff, I’ve gained 10lbs. I know you were probably expecting me to say I’ve gained 20-30, but the truth is I typically eat half (if not less) of the food pictured on my instagram. Also, I typically only eat one gluttonous meal a day, with my breakfast consisting of an all fruit smoothie and my snacks usually being dried fruit, almonds or a Kind bar. However, you’ll rarely see pictures of the healthy stuff because people aren’t interested in a picture of some almonds.
As of my last birthday (2013) I’m on a “hot by 30” mission and I’m aiming for my original goal of 150lbs. That mentality is still there; that sad and lonely fatgirl is still a part of me and always will be. When something bad happens in my life, my first instinct is to reach for the chocolate and cheeseburgers. That paranoia whispers in the back of my head whenever I walk into a gym. That shame is still partially there when I decide to splurge and get dessert at a restaurant. I regained control of my life and I know to dismiss those whispers of paranoia when they creep up. I am stronger than that cheeseburger, as delicious as it may be and I am the one in control
« Gusto Fino Italian Deli: My New Favorite Hole-In-The-Wall
Cheesy Beer Bread Recipe »