This stuffing has a lot of bold flavors and textures from the crunch of chicharrones to the sweetness of the fried plantains.

Like my pumpkin pie tres leches recipe, this recipe is for my second-gen Latin immigrants who brine their Thanksgiving turkeys in Cuban Mojo. This chicharron thanksgiving stuffing recipe takes traditional American stuffing and infuses it with some Caribbean flare.

What you'll need for this recipe

How to make stuffing from scratch

First you'll need to make your chicharrones, you can use my recipe. If you don't want to make the chicharrones and live in an area where they're easily accessible you can buy them already made. If you made them from scratch, you'll need to reserve the fat drippings.

Then you'll need to peel, cut and fry up your sweet plantains. For this recipe, I like to chop up the plantains into small cubes.

Sauté your onions and celery in the reserved pork fat drippings from your chicharrones. If you didn't make your own chicharrones, you can use bacon drippings or store-bought lard.

In a small sized bowl, mix your eggs, mojo and broth. In a separate large bowl, fold in your chopped chicharrones, sweet plantains and bread cubes.

Pour the mixture into a 9x13 pan, cover with aluminum foil and bake.

To save time, bake, chop and dry out the bread the night before and leave uncovered on the counter. Be sure to chop your bread into small ½ inch cubes, anything bigger will make it hard to mix.

Salt to taste! The chicharrones tend to have a good amount of salt in them as does the rendered pork fat and cuban mojo. As as a result, I do not add a lot of salt to this recipe, but you're welcomed to add more to your liking.

If you need to keep the homemade stuffing warm before serving it, loosely cover it with foil and stick it in a 200F oven.

What’s the Best Bread for Stuffing?

For this chicharron Thanksgiving stuffing used a French baguette for this recipe, a sturdy sourdough loaf would work too. It retained the flavor but still maintains its texture.

I tried to keep it completely Spanglish and attempted to use Cuban bread instead, but it turned into a mush. I wasn’t a fan of that, it felt like a savory bread pudding.

How to store your Thanksgiving Stuffing

this stuffing can be stored in an airtight container for up to 5 days in the refrigerator.

What to serve with this Chicharron Thanksgiving stuffing

If you're going for full-blown spanglish Thanksgiving then you'll need to also make some Cuban black beans, Cuban white rice. For dessert, the only reasonable option is pumpkin pie tres leches cake. 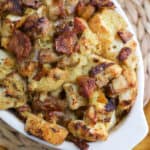