Jump to Recipe Print Recipe
This pumpkin pie tres leches recipe is for everyone that brines their Thanksgiving turkey in Cuban mojo. For the children and grandchildren of immigrants who’s Thanksgiving meals include side dishes from their parent’s homeland like pupusas, frijoles negros, yuca or gallo pinto. As a second generation immigrant myself, traditionally American celebrations always call for a marriage of both American food and food from my parent’s country of origin. 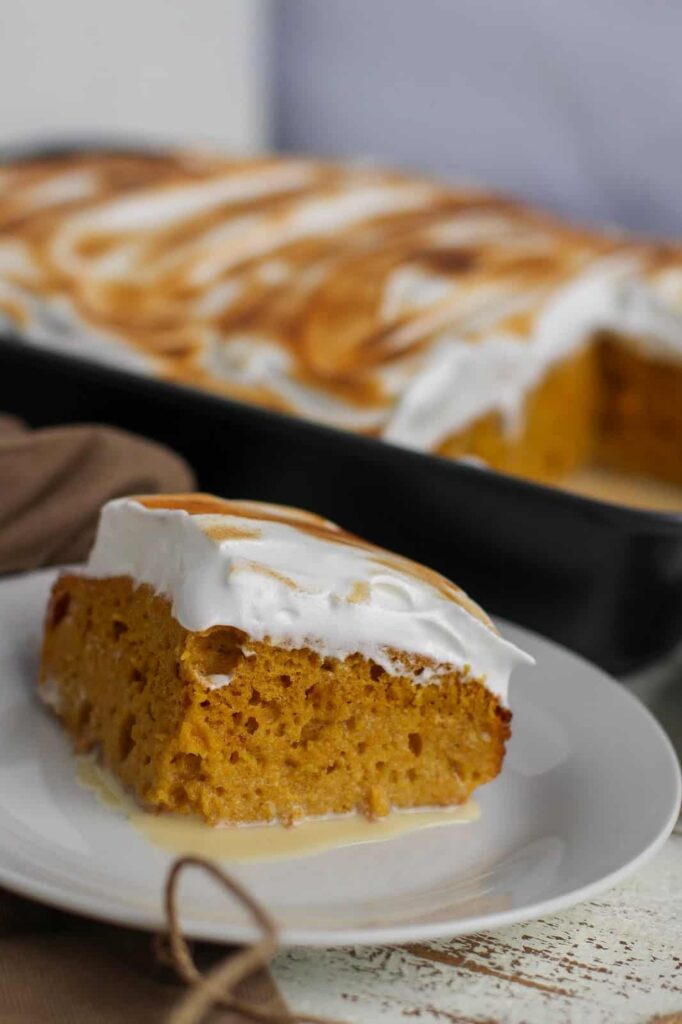 As the daughter of immigrants, I am forever caught between the country that I have called home my entire life and the culture/traditions my parents have passed down to me. To me, a Thanksgiving meal is not complete without a pumpkin pie and the Macy’s parade. However, my mom scoffs at the idea of a pie served on Thanksgiving that is made from pumpkin, her exact words are, “Pie de Calabaza?! Mija, eso no es comida!” So there is always a flan or arroz con leche next to my pumpkin pie.

Being born in the US to immigrant parents, I’m caught between two cultures. I’ve assimilated to life in the US and I always find myself incorporating aspects of my heritage into everyday life. Whether it’s the way we drive or literal translations to Hispanic idioms, our culture is engrained in everything we do.
Nowhere is this more evident than in the food we eat. We (second and third generation immigrants) take traditionally American foods or holidays and give them an immigrant twist by mixing in our roots. As South Florida’s dining scene evolves, we’re even starting to see this in dishes around town like Pastelito Papi’s peanut butter and jelly pastelito or Ariete’s frita egg’s benedict.
This year, I’m making a pumpkin pie tres leches with torched maple meringue. This will be my attempt to win over my mother and show her calabaza ain’t so bad. The fact that there’s a quarter cup of bourbon in the recipe, also helps soften the blow. 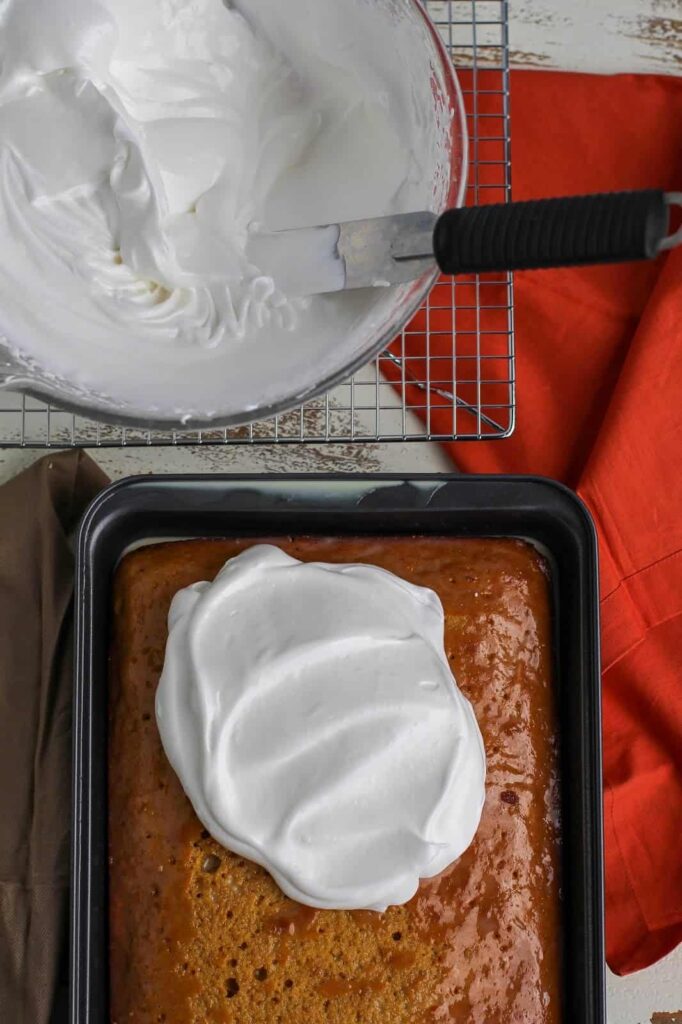 layering the maple meringue on the cake

What is tres leches cake?

Tres leches translates to three milks. It is a Nicaraguan dessert that has become popular throughout all of Central and South America as well as the Caribbean. The cake is typically a buttery sponge cake that is soaked in a combination of evaporated milk, condensed milk and heavy cream. The cake is then topped with meringue or whipped cream. 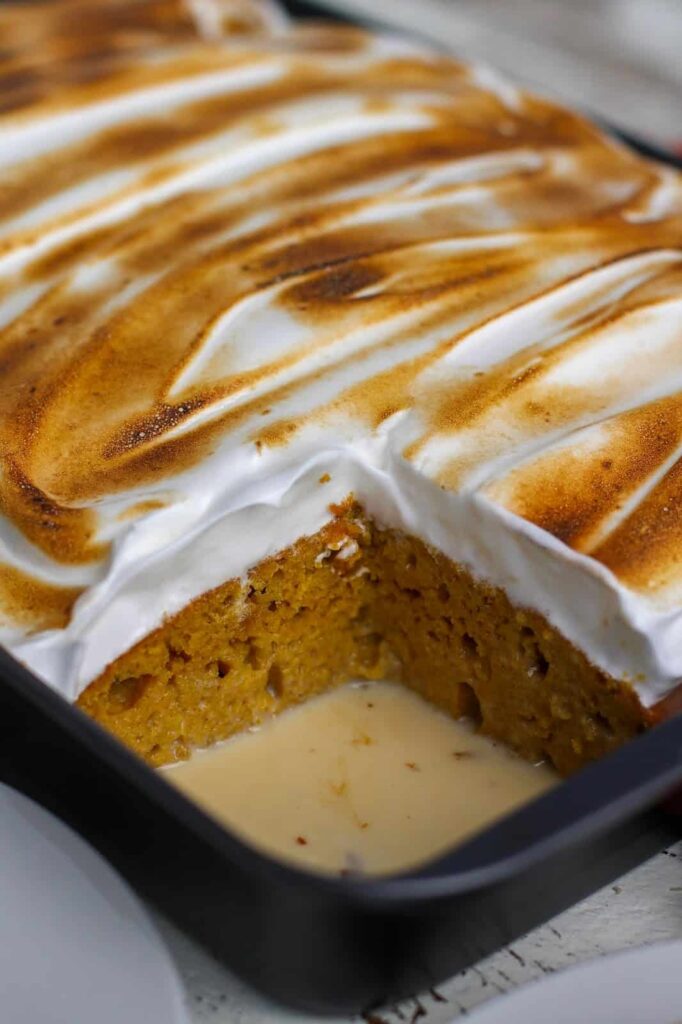 How to store this pumpkin pie tres leches cake?

This cake must be stored in the refrigerator. You can store it in the fridge for upto 3 days in an airtight container.

How is this pumpkin pie tres leches different from traditional? 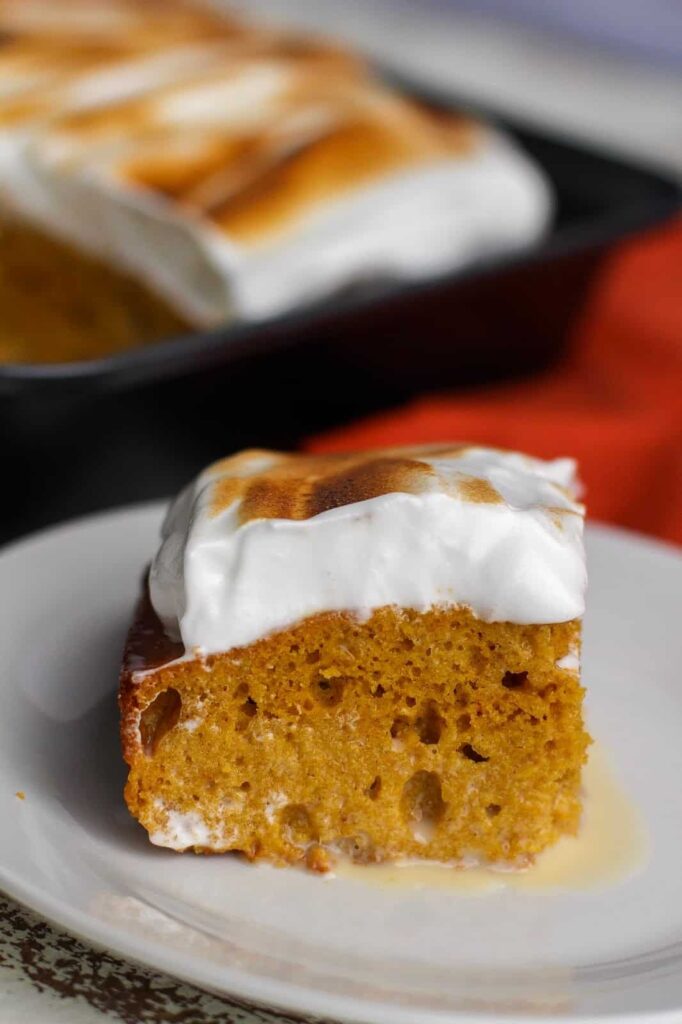 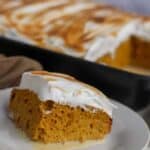