This Cuban dulce de leche cortada recipe has been passed down from my father. In an effort to not waste any food, Cubans like many others made sure to use everything they had even curdled milk. They take something sour and spoiled and convert it into something delicious and sweet.

It's a recipe I loved as a child and as an adult have a deep appreciation for. The curdled milk turns into sweet curds and the whey turns into a delicious syrup.

What to serve with dulce de leche cortada

This dish is typically served chilled and on its own. However, I have seen some people serve it with queso blanco or as a topping on vanilla ice cream.

What is dulce de leche cortada?

For this recipe all you need is a 5-6 quart caldero with a lid.

How do you make dulce de leche cortada?

This dessert is made using spoiled whole milk. I confess that when I was little I would sneak out of my bed in the middle of the night and take the milk out of the fridge on purpose. In the morning, the milk would be spoiled and in an effort not to waste the milk my mom would make this dessert.

The spoiled milk cooks low and slow for a about 2-3 of hours in a large pot with lime juice, lime zest, cinnamon, vanilla, salt and sugar. After a few hours the result is a caramel colored delicious dessert that tastes sweet with hints of tanginess from the citrus. It has a mildly chewy/squeaky texture like a cheese curd.

How to curdle milk in a hurry

Don't want to wait until the milk curdles on its own? No worries. Place your milk in a dutch oven and add to it the lemon/lime juice. Allow it to sit for 20 minutes or until the milk separates and curdles.

Your dulce de leche cortada should be stored in an airtight container inside the refrigerator. It will keep there for upto 5 days.

Check out these other Cuban recipes 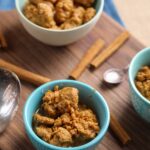 Some people like the dulce de leche to be a rich amber color, if that's the case let it cook for a bit longer until you reach the desired color. If you do not like having larger curds and prefer smaller bits, stir frequently to break up the curds until you reach your desired consistency.