What happens when you're craving a pastelito de guayaba y queso and you're also craving a fresh, warm pop tart? You end up with guava and cheese pop tarts. The best of Cuban and American worlds. As a second generation immigrant, many times I find myself craving mom's cooking or craving some American comfort food. Either or, never both. So when rare opportunities to marry both cuisines occur, I jump at the chance.

What are pop tarts made out of?

The outer layer of these guava and cheese pop tarts are made out of traditional pie crust. In this recipe, I give the ingredients and instructions to make your own pie crust, but you could use store-bought if you wanted to.

How do you store your guava and cheese pop tarts?

Once you've baked them, you can store these pop tarts in an air tight container for upto 3 days in the refrigerator. You'll need to pop them in the toaster oven to warm them back up. 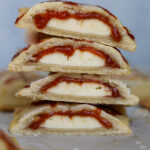