Jump to Recipe
This post was done in partnership with Sunions.
It’s a little known secret that I am obsessed with French Onion Soup, but I never make it for myself. There’s a few reasons why I never make it, but the main reason is that I HATE slicing onions. Every single time I have to cut onions, I have to wear sunglasses to try and avoid crying. What starts off as chopping onions for a recipe turns into me sobbing uncontrollably, so I always add as little onions as possible to any recipe.
So when Sunions reached out to me about their tearless onions, I was mesmerized. Like, is it really possible to cut up an entire onion without shedding a single tear?! I decided to take Sunions on and test out their claim of being tearless onions.

To my surprise, after slicing up 2 giant onions, there were no tears at all. The sigh of relief I exhaled could easily be heard by my neighbors. I ended up chopping 5 big onions and not a single tear was shed.

I was so impressed and the only thing I could think to make was French Onion Soup. The most painful part of the recipe was already done, now to move onto the second most painful part: caramelizing the onions.

You’ll see some recipes online that say you can caramelize onions in 30 minutes… that’s a lie. Some people will say it takes 5-6 hours and I just don’t have the patience for that. I caramelize my onions for about 2 and a half hours. To my surprise, Sunions flavor was just as good as regular onions and the fact that they’re tearless did not negatively affect their flavor in any way.

This soup is great as an indulgent appetizer or serve yourself a large bowl and make it your entree. Between the rich broth, cheese and caramelized onions, you cant go wrong. 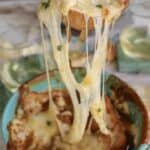 The cheese layer should cover the whole surface, so it will stick to the sides and form a crust that holds its shape and does not sink.