My son isn't a dessert person, which made me wonder how he was even my child. However, over the years we've found his love for all things chocolate. Chocolate cake is the only cake he'll eat and these fudge topped brownies are his absolute favorite.

These fudge topped brownies actually have two secret ingredients. The first being a pinch of cinnamon in the brownie batter. The cinnamon adds a great complexity and richness to the flavor of the brownies.

The second secret ingredient is freshly brewed espresso coffee in the chocolate fudge topping. This fudge is actually the same fudge I use in my triple chocolate cake. Coffee and chocolate make a perfect pairing.

Fudgy brownies have a much higher fat to flour ratio. For these brownies you see there's equal parts butter and flour. Cake like brownies had much more flour and the addition of baking powder.

What equipment you'll need to make these the perfect fudgy brownies?

What mix-ins can I add to my brownies?

Nuts like walnuts or pecans would be a great addition. Peanut butter chips, Caramel or butterscotch chips are also fun mix ins. Marshmallows can also be mixed in, For any desired addition, only add ½ a cup. 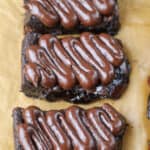